A complete documentation of the X-11 method is available in LADIRAY, D., and QUENNEVILLE, B. (2001). The X-11 program is the result of a long tradition of non-parametric smoothing based on moving averages, which are weighted averages of a moving span of a time series (see hereafter). Moving averages have two important drawbacks:

These drawbacks adversely affect the X-11 output and stimulate the development of this method. To overcome these flaws first the series are modelled with a RegARIMA model that calculates forecasts and estimates the regression effects. Therefore, the seasonal adjustment process is divided into two parts. 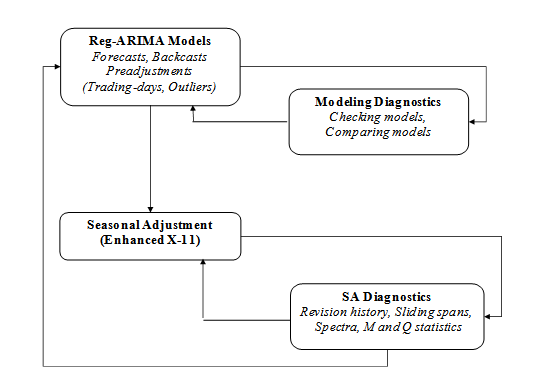 The flow diagram for seasonal adjustment with X-13ARIMA-SEATS using the X-11 algorithm.

The moving average of coefficient $\theta_{i}$ is defined as:

The basic algorithm of the X-11 method

The X-11 method is based on an iterative principle of estimation of the different components using appropriate moving averages at each step of the algorithm. The successive results are saved in tables. The list of the X-11 tables displayed in JDemetra+ is included at the end of this section.

The basic algorithm of the X-11 method will be presented for a monthly time series $X_{t}$ that is assumed to be decomposable into trend, seasonality and irregular component according to an additive model $X_{t} = TC_{t} + S_{t} + I_{t}$.

Step 2: Estimation of the Seasonal-Irregular component:

Step 3: Estimation of the Seasonal component by $\mathbf{3 \times 3}$ moving average over each month:

This first estimation of the seasonally adjusted series must, by construction, contain less seasonality. The X-11 method again executes the algorithm presented above, changing the moving averages to take this property into account.

Step 6: Estimation of the Seasonal-Irregular component:

Step 7: Estimation of the Seasonal component by $\mathbf{3 \times 5}$ moving average over each month:

The whole difficulty lies, then, in the choice of the moving averages used for the estimation of the trend in steps $1$ and $5$ on the one hand, and for the estimation of the seasonal component in steps $3$ and $5$. The course of the algorithm in the form that is implemented in JDemetra+ is presented in the figure below. The adjustment for trading day effects, which is present in the original X-11 program, is omitted here, as since calendar correction is performed by the RegARIMA model, JDemetra+ does not perform further adjustment for these effects in the decomposition step. 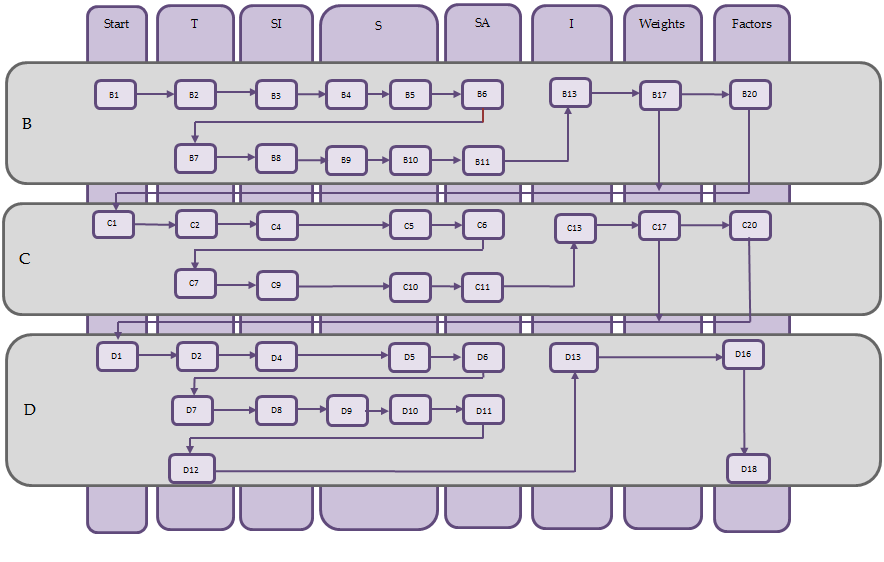 The iterative principle of X-11

The Census X-11 program presents four processing stages (A, B, C, and D), plus 3 stages, E, F, and G, that propose statistics and charts and are not part of the decomposition per se. In stages B, C and D the basic algorithm is used as is indicated in the figure below. 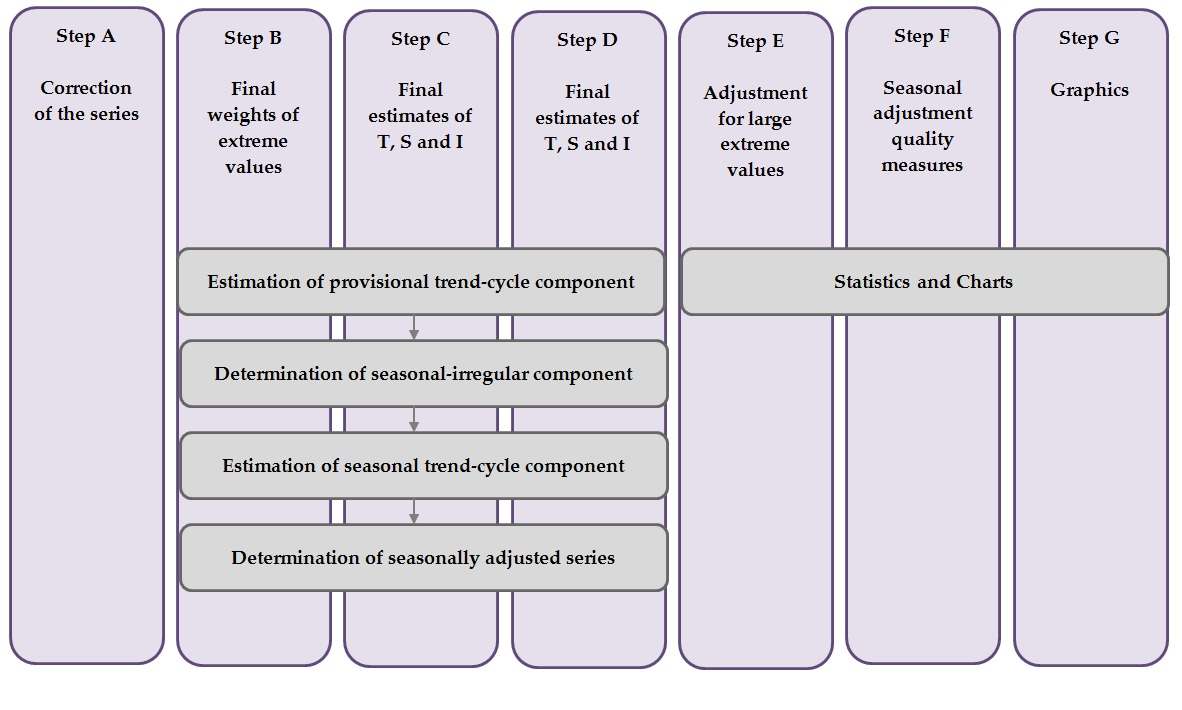 A workflow diagram for the X-11 algorithm implemented in JDemetra+. Source: Based upon training material from the Deutsche Bundesbank

This part, which is not obligatory, corresponds in X-13ARIMA-SEATS to the first cleaning of the series done using the RegARIMA facilities: detection and estimation of outliers and calendar effects (trading day and Easter), forecasts and backcasts1 of the series. Based on these results, the program calculates prior adjustment factors that are applied to the raw series. The series thus corrected, Table B1 of the printouts, then proceeds to part B.

This stage consists of a first estimation and down-weighting of the extreme observations and, if requested, a first estimation of the calendar effects. This stage is performed by applying the basic algorithm detailed earlier. These operations lead to Table B20, adjustment values for extreme observations, used to correct the unadjusted series and result in the series from Table C1.

Applying the basic algorithm once again, this part leads to a more precise estimation of replacement values of the extreme observations (Table C20). The series, finally "cleaned up", is shown in Table D1 of the printouts.

This part, at which our basic algorithm is applied for the last time, is that of the seasonal adjustment, as it leads to final estimates:

The results from part E are used in part F to calculate the quality measures.

Originally, graphics were displayed in character mode. In JDemetra+, these graphics are replaced favourably by the usual graphics software.

The Henderson moving average and the trend estimation

In iteration B (Table B7), iteration C (Table C7) and iteration D (Table D7 and Table D12) the trend component is extracted from an estimate of the seasonally adjusted series using Henderson moving averages. The length of the Henderson filter is chosen automatically by X-13ARIMA-SEATS in a two-step procedure.

It is possible to specify the length of the Henderson moving average to be used. X-13ARIMA-SEATS provides an automatic choice between a 9-term, a 13-term or a 23-term moving average. The automatic choice of the order of the moving average is based on the value of an indicator called $\frac{\overline{I}}{\overline{C}}\ $ratio which compares the magnitude of period-on-period movements in the irregular component with those in the trend. The larger the ratio, the higher the order of the moving average selected. Moreover, X-13ARIMA-SEATS allows the user to choose manually any odd‑numbered Henderson moving average. The procedure used in each part is very similar; the only differences are the number of options available and the treatment of the observations in the both ends of the series. The procedure below is applied for a monthly time series.

In order to calculate $\frac{\overline{I}}{\overline{C}}\ $ ratio a first decomposition of the SA series (seasonally adjusted) is computed using a 13-term Henderson moving average.

Then the value of $\frac{\overline{I}}{\overline{C}}\ $ ratio is checked and in iteration B:

Then the trend is computed by applying the selected Henderson filter to the seasonally adjusted series from Table B6. The observations at the beginning and at the end of the time series that cannot be computed by means of symmetric Henderson filters are estimated by ad hoc asymmetric moving averages.

In iterations C and D:

The trend is computed by applying selected Henderson filter to the seasonally adjusted series from Table C6, Table D7 or Table D12, accordingly. At the both ends of the series, where a central Henderson filter cannot be applied, the asymmetric ends weights for the 7 term Henderson filter are used.

Choosing the composite moving averages when estimating the seasonal component

In iteration D, Table D10 shows an estimate of the seasonal factors implemented on the basis of the modified SI (Seasonal – Irregular) factors estimated in Tables D4 and D9bis. This component will have to be smoothed to estimate the seasonal component; depending on the importance of the irregular in the SI component, we will have to use moving averages of varying length as in the estimate of the Trend/Cycle where the $\frac{\overline{I}}{\overline{C}}\ $ ratio was used to select the length of the Henderson moving average. The estimation includes several steps.

The overall Moving Seasonality Ratio is calculated as follows:

Step 4: Selecting a moving average and estimating the seasonal component

Depending on the value of the ratio, the program automatically selects a moving average that is applied, column by column (i.e. month by month) to the Seasonal/Irregular component in Table D8 modified, for extreme values, using values in Table D9.

The default selection procedure of a moving average is based on the Moving Seasonality Ratio in the following way:

Identification and replacement of extreme values

X-13ARIMA-SEATS detects and removes outliers in the RegARIMA part. However, if there is a seasonal heteroscedasticity in a time series i.e. the variance of the irregular component is different in different calendar months. Examples for this effect could be the weather and snow-dependent output of the construction sector in Germany during winter, or changes in Christmas allowances in Germany and resulting from this a transformation in retail trade turnover before Christmas. The ARIMA model is not on its own able to cope with this characteristic. The practical consequence is given by the detection of additional extreme values by X-11. This may not be appropriate if the seasonal heteroscedasticity is produced by political interventions or other influences. The ARIMA models assume a constant variance and are therefore not by themselves able to cope with this problem. Choosing longer (in the case of diverging weather conditions in the winter time for the construction sector) or shorter filters (in the case of a changing pattern of retail trade turnover in the Christmas time) may be reasonable in such cases. It may even be sensible to take into account the possibility of period-specific (e.g. month-specific) standard deviations, which can be done by changing the default settings of the calendarsigma parameter (see Specifications-X13 section). The value of the calendarsigma parameter will have an impact on the method of calculation of the moving standard deviation in the procedure for extreme values detection presented below.

The seasonal component is estimated by smoothing the SI component separately for each period using a $3 \times 3$ moving average, i.e.:

The preliminary seasonal factors are normalized in such a way that for one year their average is equal to zero (additive model) or to unity (multiplicative model).

The default settings for assigning a weight to each value of irregular component are:

The default boundaries for the detection of the extreme values can be changed with LSigma and USigma parameters (see Specifications-X13 section).

Values of the SI component are considered extreme when a weight less than 1 is assigned to their irregular. Those values are replaced by a weighted average of five values:

When the four full-weight values are not available, then a simple average of all the values available for the given period is taken.

This general algorithm is used with some modification in parts B and C for detection and replacement of extreme values.

The list of tables produced by JDemetra+ is presented below. It is not identical to the output produced by the original X-11 program.

Part A – Preliminary Estimation of Outliers and Calendar Effects.

This part includes prior modifications to the original data made in the RegARIMA part:

Part B – Preliminary Estimation of the Time Series Components: